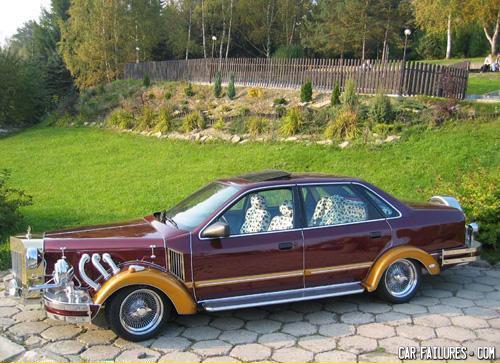 There are many, seemingly pointless cars out there as manufacturers chase ever smaller niches and profit margins (yes Audi and BMW, you may well look guilty). But while most are just variations on a theme – bigger or smaller versions of other, more popular models – some cars stand out for their sheer, bloody-minded futility, making you wonder what on Earth was going on in the original presentation meeting and just who would be daft enough to buy one in favour of an obviously better choice?

BMW X6   Most recent incarnations of the 4×4 SUV are a fairly poor lot: over-engineered, overweight and under achieving: neither good estate nor a good off-roader. But the X6 really has to take the award for most useless of the breed. An off-road coupe. Really? The definition of a coupe – at least in England – used to be a sleek and stylish, two door sporty little number. Why on earth would anyone want to combine these attributes with a 4×4 SUV? I’m really struggling with the concept of this one; if you want a coupe, there are plenty of excellent alternatives to suit all pockets. If you need – or feel you need – an off-roader, again, there are many supremely efficient mud-pluggers on the market. I’m still trying to imagine the meeting where this one was presented to the board; particularly good wine with lunch that day?

Bugatti Veyron   I could also include the Lamborghini Aventador, Pagani Zonda, Ford GT and any number of ‘hyper’ cars here. I’m not talking about run-of-the-mill Ferraris, Astons and and Porsches from the lower eschelons (those that offer a modicum of practicality), I’m talking about the truly outrageous hypercars, of which the Veyron currently represents the highest pinnacle. A car that does 254 mph, holds only two passengers and little more than an overnight bag, is wider than a Transit van, heavier than a LWB Jaguar XJ and can’t (easily) be driven in any circumstances outside an autobahn or racetrack. Ok, I’ll admit to never having been lucky enough to have driven a Bugatti. Or a Lamborghini Aventador or any one of a number of such cars, but I’m not writing this out of sheer enviousness. I can gawp in awe at the achievement of the manufacturers, and feel the world would be a poorer place if such cars didn’t exist, but there comes a point beyond which they become completely point-less. I’m also sure that the wealthy owners of these cars have a ‘regular’ car (or six) and don’t have to worry about such petty issues as practicality, but I still can’t help the nagging feeling that they’d have far more fun in a Lotus Elise, Alfa 4C coupe or Porsche Cayman. Or even a Citroen 2CV for that matter.

Diesel Alfas   Whenever I feel a yearning for another Alfa Romeo (and I frequently do) my only reason to justify the purchase over something obviously better – usually from BMW, or even Ford for that matter – would be because of its charisma. Choosing an Alfa is a purely emotional decision; but starting the engine and hearing the clatter of a diesel shatters the illusion. I can understand Alfa’s pragmatic need to make such cars, but really, stop it now.

Caterham 7   I feel very guilty about this one. I’ve admired the little 7 for years. Even built one myself. And there’s the rub; when I used to be lucky enough to borrow one from a friend I’d take it for a short blast on A and B roads, usually on a fine day with the top down. It was an absolute hoot. But then I bought one myself and the reality of owning one was a different matter: it was too low to cope well with the speed-humped, urban crawl, fairly hopeless on motorways, noisy and cramped. Weather protection is a makeshift affair involving tent poles, press studs and broken nails. And once up, the inadequate hood made the driving experience an absolute misery. As if all that wasn’t bad enough, the 7 has now been superceded on its natural home, the track: the BMW M3 and even the front-drive Renaultsport Meganes can easily match lap times, while also offering comfort and practicality. But the final nail in the 7’s coffin came after I’d tried a motorbike. With a bike’s superior acceleration and it’s ability to bypass traffic jams – the 7 made no sense at all. And at least on a bike you prepare yourself for the weather in advance.