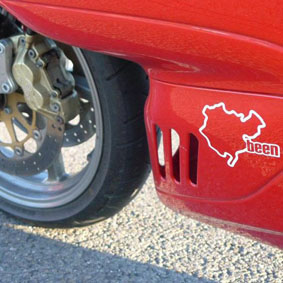 To die would be an awfully big adventure.

In January 2009 I mounted a Yamaha SR125 and lurched around some orange cones in a school playground on the first day of my bike riding course. Other than a wobble down an alleyway on my grandmother’s Honda C50 in 1975 this was my first motorcycling experience. Despite its obvious decrepitude, the little Yamaha gave me one of the most exhilarating experiences of my life. Being a naturally cautious fellow I like to take all new learning experiences – especially those involving dangerous and unfamiliar vehicles – at a very gentle pace. So by August I had bought an 800cc Ducati. And by the following summer I finally achieved a lifelong ambition of a trip to the Nürburgring.

Now, we’ll be taking this very easy. Mustn’t forget I’ve already dropped the bike twice on the trip over here (yes, I know it was the wrong side of the road) and I’m not absolutely sure I’ve screwed this new brake lever on properly. Perhaps I should have brought more tools than a Swiss Army knife.

Let’s see, ticket swiped, now er… what do I do with it? Gloves off… “Sorry! Yes, first time”… ticket tucked away in a pocket, gloves back on, here we go.

The German official grabs a handful of leg and roughly rubs between finger and thumb. He looks sceptical.

Right, we’re off… whoops!… er… where am I exactly? This isn’t where you start on the Playstation. F*** – CHICANE! Ah, at least I know where I am… Blimey, this right-hander’s a lot tighter than I thought – drifting to the left, keep right to let all the fast stuff through… BWAAAAHHHH! BWAAAAHHHH! JESUS! They’re not taking any prisoners… Don’t look at the bend, look at the road ahead… Keep right… BWAAAAHHHH! F***! What was that? Porsche GT2 or GT3? You can tell the difference by the… CONCENTRATE ON WHAT YOU’RE DOING. Whooooooh – bends are much tighter than they look on the video and there’s serious camber. Keep right, keep right, take it steady… blimey, there’s a lot of crap at the side of the road, bits of rubber and debris… Uuuuhhhh! G-forces… Don’t look at the bend, look at the road ahea… DON’T LOOK AT THE BEND! “Wahhhhhhh!!!” It’s ok, no one can hear you scream inside the helmet. Don’t stuff it, don’t stuff it… Ok, getting into the swing of it now, at least I know which way the bends go… BWAAAAHHHH!! BWAHHHH!! BLOODY HELL THEY WERE A BIT CLOSE… Brake, don’t lock up, this is a tight one… F***, he’s lost it just in front of me, spinning backwards – the car following him has just managed to keep it together in a cloud of tyre smoke… The Karussell! Most infamous bend in the world – SCREEEEEEEECHHHHHHHHHH!!! Woah! That’s the M5 ‘Ring Taxi drifting all the way round the outside of the Karussell, I’ve never seen control like that before…. actually it doesn’t look that bad and there’s no one behind me, I’ll try to stay in the drainage channel: BWHH-BWHH-BWHH-FUU-FUU-BOUNCY!! Too much G!… LOOK AHEAD, NOT DOWN…F*** – bounced straight out two thirds of the way round… Right, last third of the circuit, Keeeeeeep riiiiiiiiiiight… F*** – NOT THAT FAR RIGHT… that curb nearly had me off then… Oh look, there’s that lovely Gallardo I saw in the car park – doesn’t look quite so lovely with that big scrape down the side… Downhill into a tight S-bend… BRAKE – CHANGE DOWN – DON’T LOCK UP – rear tyre leaps sideways on downchange F***, S***!!! Last bend, this is it, the long straight, nail it coming out of the corner and see if you can get it up to 140… 110, 120, 130… F****! Where did the straight go? On the Playstation it’s much longer – they’ve moved the finish line to halfway along… BRAKE, BRAKE, BRAAAAAAAAAAAAAAKE!!!!

Repeat with subtle variation (except for rear tyre leaping sideways on the S-bend every bloody time) until the bike smells of burning brakes and clutch and the rider needs a change of underwear. Then turn around and ride for 4 and a half hours back to the Eurotunnel.